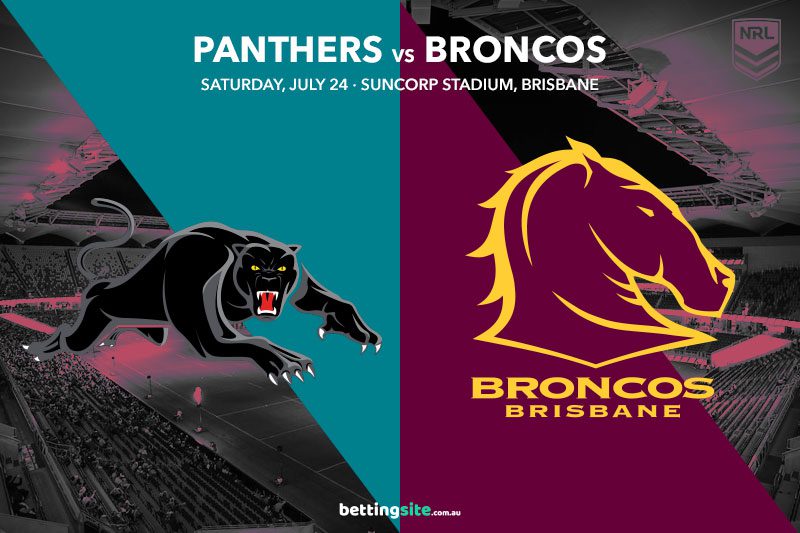 The Penrith Panthers will ‘host’ the Brisbane Broncos at Suncorp Stadium to cap off Super Saturday in Round 19 of the 2021 NRL season.

Penrith will be buoyed by the return of Jarome Luai in the halves and the big signing of Tevita Pangai Jr on a short-term contract. With just Nathan Cleary missing this weekend, the Panthers are otherwise at full strength and should take another step forward as they ramp up the intensity in the last few weeks before the finals.

The Broncos were terrific in patches against the Tigers last Sunday but fell in an enormous hole in the final 20 minutes to throw away two points. Brisbane are slowly piecing together longer stretches of consistent football and pushed the Panthers all the way back in Round 6, while Penrith were a little sluggish to start the game against the Warriors last week and will need to sharpen up lest the Broncos jump them out of the gates.

Jarome Luai coming back into the starting side means the lethal left edge of Penrith is back intact, and more often than not that has led to tries for Brian To’o and Stephen Crichton. Viliame Kikau is the magnet on that side of the field which attracts the defence’s attention, but even he picked up a double last week and can’t be discounted from scoring again.

The big weakness in the Broncos defensive line that was exposed last week was the channel between Brodie Croft and Alex Glenn, so it brings Kurt Capewell into the frame as a tasty $19 first tryscorer option or $3.10 to score at any time. The line of -19.5 may be a little long even with Luai back in the side, and it might not be until Cleary returns that punters can take on that sort of gap with any kind of confidence.

A staple of Brisbane Broncos football for so long was backing Corey Oates to be the first tryscorer, and he found some of his best form against the Tigers when he got over in the corner to open the scoring. He is $15 to do the same again this week, and Broncos fans will no doubt be all over that as well as the $2.40 for him to score a try at any time.

The recent form of Tesi Niu has been a nice story amid Brisbane’s tough season, and he should be considered in the anytime tryscorer betting at $3. The Broncos have started their last two games well and Penrith have been in a bit of a flat spot, so it might be the week to back Brisbane at the +19.5 line.

They might be the best two props in the game, so Payne Haas and James Fisher-Harris ripping into one another has to make fans excited for their showdown on Saturday night. The Broncos’ dependence on Haas has become a problem they will have to address in the future, and blind Freddie could see how much their yardage game suffered when he left the field against the Tigers. Fisher-Harris has become the most consistent middle forward in the NRL and can take the best shots of the opposition while he continues to power up-field, putting Penrith in position to succeed more often than not.

Penrith will get the two points and continue to roll on, but the money to be made is taking the Broncos at the +19.5 line. The Panthers have just been flat as they roll through the middle of the season knowing they’ll finish high up the ladder, and finding motivation to be at their best in Round 19 against a team who won’t feature in the finals is hard to do sometimes.

We think every winger will score in this game, so get on Corey Oates, Brian To’o, Jamayne Isaako and Charlie Staines in the anytime try market for a $13.75 return.