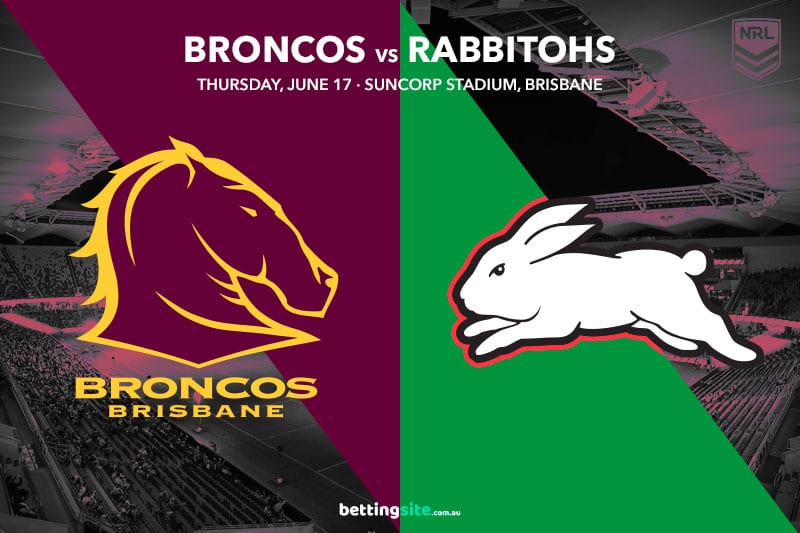 Adam Reynolds will head to Suncorp Stadium on the visiting side one last time when the South Sydney Rabbitohs take on the Brisbane Broncos this Thursday night to open Round 15 of the 2021 NRL season.

The Broncos did manage to get a shock win over the Bunnies in 2020, but the form suggests no such result will occur this week. The Rabbitohs are 10-3 on the season so far and have only lost to the two teams who are favoured to contest the 2021 NRL Grand Final, so their work against the rest of the competition has been irresistible. Their clash with Newcastle in their last start was close for the most part, but they were in complete control of the outcome for the entire 80 minutes.

Brisbane have been blown off the park in their last three games, which has completely undone the win they had over the Roosters. Kevin Walters has a team that tries hard, but the Broncos lack experience in a lot of positions and are over the hill in others. Their $5.75 price at BetOnline should drift in the build-up to kickoff.

One thing that can be guaranteed is this game will topple over the total points line, with the Brisbane Broncos conceding 130 points all told in their last three losses. With their defence in tatters, Broncos fans haven’t even been able to bank on Xavier Coates scoring a try. Coates has failed to score in his last three games for the club and had a horror night for Queensland in Origin I, so it might be the first time this year we suggest steering clear of the big winger.

Finding tryscorers for the Broncos in this game is a bit like throwing darts in the dark, but perhaps Tesi Niu will be one to watch if he remains on the left edge. The line is +16.5, but it is hard to see Brisbane staying under that margin against a Rabbitohs side who score tries for fun against bad teams.

South Sydney’s left edge proved to be where the money was made against Newcastle, with Alex Johnston scoring a hat-trick to take his season tally to 15 tries. While getting back-to-back trebles is extremely rare, book him in for a double against the Broncos. Johnson barely needs any space, and the defence of Brisbane is going to give him plenty of chances.

Take the Rabbitohs at the -16.5 line, as they should cover that comfortably even if they don’t quite play at their best. Latrell Mitchell dominated Origin I and gets a great chance to warm up for Origin II with a dress rehearsal at the venue where he will try to help New South Wales win the series. Expect a big game from him and at least one four-pointer.

A lot of the attention is going to be on Adam Reynolds with his impending arrival at Brisbane, and for good reason. The Broncos have some terrific young forwards but lack any sort of consistency in the halfback role. Tyson Gamble has showed he can be a terrific backup option in an NRL squad, but this contest will be a great example of why the best halfbacks command big money. Reynolds can control the tempo of a game and his kicking is almost always terrific, while Gamble lacks the skillset and consistency to be a top-line half at NRL level.

South Sydney will win comfortably and cover the -16.5 line. Their left edge strike is just too much for Brisbane, who will leak at least four tries down that side of the field.

We like Alex Johnston to score a double, while Cody Walker and Latrell Mitchell should also cross at some stage. Tie those legs in with the Rabbitohs at the line for a $10.75 return at Sportsbet.